To directly support an indigenous community that is fighting to contain fires in the Amazon as we speak, please donate HERE.

The fires that are burning now in the Amazon have captured the attention of the world in the past week. Two camps emerged:  one sincerely concerned about the fate of the Amazon and the other one that this is business as usual. Alarmingly, in the latter camp sit several scientists and reputable some magazines that tell us it is all ok and that we should not worry. While I agree we should not exaggerate the facts or feelings, I believe that we are facing a real problem. We need now, more than ever, to understand what is happening in the Amazon and why. We need to get people to understand that this huge swath of rainforest is important to us. To every one of us.

Every year the Amazon burns: there are wildfires – spontaneous combustions –  and there are fires set by ranchers who prepare their croplands for planting, which usually starts in September-October. Indigenous peoples themselves use slash and burn agriculture, they have been using it for generations, however their fires are so small they are almost invisible.

So why should we be more concerned about the fires in the Amazon this year? There are many things that stand out in 2019 than in the past:

BUSINESS-AS-USUAL vs ILLEGAL DEFORESTATION AND BURNING

I have seen wild fires starting literally under my eyes: I was in Xingu Indigenous Park, in a pocket of savanah surrounded by forest. It was so hot and the grass was so dry that it caught fire in front of my eyes. So yes, wildfires are a natural occurrence. They happen every year. However, their intensity, extent and frequency has increased. This is mostly due to massive deforestation (especially in the states of Mato Grosso and Para, on the “Deforestation Belt” of Brazil) which led to the change in local weather patterns. The forest has been replaced with endless soy fields and pastures. This brought prolonged droughts, less rain in the rainy season. The air became hotter and dryer, the vegetation dries out faster. A wildfire in these conditions will create more damage, on a larger scale than before.

I have felt the difference in temperature and humidity between forested and deforested areas while traveling to Xingu Indigenous Park. The road ran though endless soy fields, the sun was scorching and it was unbearably hot and dry. As soon as the road traversed a forested area, the temperature fell dramatically and the air cooled down and was breathable again. The change was almost unbelievable! That was my living proof that forests do regulate temperature and humidity. Now, imagine this on a planetary scale.

Fire is used to expand the agricultural frontier and to maintain existing plots. Agricultural fires are the business-as-usual fires: the fires set by ranchers on their lands, preparing them for the next planting season. They happen every year. What is unusual now is that these fires can spread and can become uncontrollable much faster than before. Ranchers would not sweat if a fire they started expanded outside their ranch and engulfed a nearby forest or protected area. Many soy farms and pastures are on the border of protected areas and indigenous territories (usually forests), therefore many of the fires that go out of control can destroy protected forests.

Faced with increasing fire problems, indigenous peoples learned how to manage them. They have been trained by environmental NGOs, and they now know how to manage fires in the new climatic conditions. For example, in areas I visited, whenever indigenous peoples burn their manioc gardens as part of their slash and burn agriculture, they send their fire brigade to monitor the garden fire until it dies out. They make paths around the garden, to stop the fire from spreading into the forest and they immediately put out any fire that reached the forest. Indigenous peoples found a solution to this new fire problem in order to protect their forest.

What gained proportion this year are the fires on illegally deforested plots, found mostly in protected areas, in the states of Para, Amazonas, Rondonia and Acre. For example, on August 28, during an overflight over a protected indigenous area in Para, authorities found illegal deforestation and illegal gold prospectors. They received complaints from indigenous leaders who have received death threats from heavily armed invaders. Illegal deforestation and mining activities in protected and indigenous areas increased recently “thanks” to the attitude of the current government who tacitly encourages these illegal activities because they go hand in hand with the new desire of opening the Amazon for business. These fires are of great concern, not the fires that are part of the business as usual. 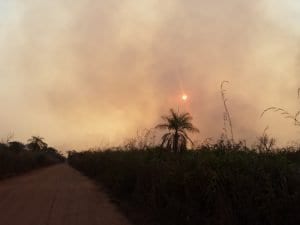 The climate is different now. Deforestation caused more drought and less rain. The dry season is dryer and longer, and the rainy season is shorter and with less precipitation. This caused existing fires to become more frequent and intense and spread over larger areas.

There is less Amazon now than before. The media reported that the 2019 fires are not as bad as the last peak of fires almost two decades ago, between 2003 and 2006. What they did not mention is that we had more rainforest back then than now, about 9% more.

THE BRAZILIAN GOVERNMENT IS DIFFERENT

The current Brazilian government is openly pro-agribusiness, is for opening the Amazon to economic exploration and is, to say the least, adverse to indigenous peoples’ interests.

Bolsonaro’s rhetoric is clearly against protecting the Amazon and the indigenous peoples living in it. He has affirmed that the Brazilian economy is dependent on exploring natural and indigenous reserves and without such exploration the country could go “bankrupt”. He criticized Brazil’s indigenous protection policies, which he says are used by outside forces to limit Brazil’s economy and give excessive amounts of land to tribes. And he is repeatedly pushing for opening more indigenous lands for agriculture and mining, saying it would benefit the people living there.

Some of his famous quotes that show why the Amazon may be in danger:

“It’s a shame that the Brazilian cavalry hasn’t been as efficient as the Americans, who exterminated the Indians.” Correio Braziliense newspaper, April 12, 1998

“There is no indigenous territory where there aren’t minerals. Gold, tin and magnesium are in these lands, especially in the Amazon, the richest area in the world. I’m not getting into this nonsense of defending land for Indians” Campo Grande News, April 22, 2015

“You can be sure that if I get there [elected President of Brazil] there will be no money for NGOs. If it’s up to me, every citizen will have a firearm in the house. There will not be a centimeter demarcated for indigenous reservations or quilombolas [descendents of African slave communities].”Estadão, April 3, 2017

“If I become President there will not be a centimeter more of indigenous land.” Dourados, Mato Grosso do Sul, February 8, 2018

“In 2019 we’re going to rip up Raposa Serra do Sol [Indigenous Territory in Roraima, northern Brazil]. We’re going to give all the ranchers guns” In Congress, posted on January 21, 2016

Right now, as the Amazon is burning, PEC 187 has been approved by the Justice Constitutional Court. PEC (Proposta de Emenda à Constituição) stands for Proposal of Constitutional Amendment. PEC 187 makes it legal to undertake forest and agrobusiness activities inside indigenous territories.

In the state of Para, August 10 was proclaimed by a group of over 70 ranchers as the “Day of Fire”. On that day, rural producers set immense fires to send Bolsonaro and his government a message: that they want to work and the only way they can work is by felling trees and clearing forested areas. Most of the fires, seen via satellite as well, were in protected areas around Novo Progresso, Altamira and São Félix do Xingu. On August 10, fires increased by 300% in these areas compared to the previous day. 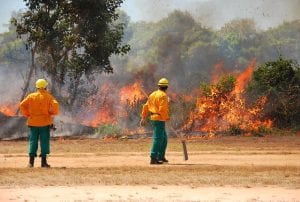 It also seems that the timing and location of fire detections early in the 2019 dry season are more consistent with land clearing than with regional drought, according to a NASA scientist. Brazilian TV stations report data from INPE and IBAMA and it is now clear that the August Amazon fires of 2019 are the worst in 9 years and the main reasons are high deforestation rates and human intervention. Illegal loggers and miners have no fear, feeling they have the support of the government: last week, an IBAMA (Brazilian Institute of the Environment and Renewable Natural Resources) team that was inspecting fire areas in the state of Para was shot at by illegal miners.

Bolivia is also burning, mostly the state of Beni, which borders Brazil. However, the government response is different. This weekend, Evo Morales announced that he would interrupt his re-election campaign for a week to help coordinate foreign aid efforts, shows The Guardian.

THE CONSEQUENCES ARE MANY. AND DIRE.

Last week, Sao Paolo went dark in the middle of the day when huge clouds of smoke descended over the city. The smoke traveled thousands of miles, from the fires in the Amazon. This weekend, indigenous peoples in Xingu experienced the same phenomenon. They could not breathe, their eyes stung from the black smoke that covered their villages.

Forests are important for climate change for many reasons, and one of them is because they store carbon dioxide. When burning, the rainforest becomes a greenhouse gas emitter, thus worsening the climate crisis. A Brazilian study shows that between 2019 – 2022 the anticipated deforestation in the Amazon will release 19 gigatons of carbon dioxide, roughly 5 gigatons a year – the yearly emissions of the whole USA.

The Amazon is vital in regulating the global water cycle and the global climate. It stores an important amount of carbon dioxide, an essential greenhouse gas. The destruction of the Amazon is worsening the global climate crisis we are already facing. There are many feedback effects of losing forest cover to fires: the fires increase greenhouse gas emissions, the temperatures rise, there is less moisture in the atmosphere, less rain, more droughts, and again more fires. It is a vicious circle.

The destruction of the Amazon comes at a time when we have just experienced the hottest month ever recorded (July 2019), when we are losing coral reefs to bleaching due to acidification of oceans (also a climate change consequence), when Greenland is losing its glaciers at an unexpected rate, when the Arctic is melting, when the permafrost is thawing (releasing methane, a powerful greenhouse gas) and when wildfires rage in the far North, destroying forests and releasing more carbon dioxide in the atmosphere. It is time to wake up and care for our planet. We have to change our mentality, or lifestyle. We have to educate ourselves and our future generations. We have to start to care.

To directly support an indigenous community that is fighting to contain fires in the Amazon as we speak, please donate HERE.