For an interactive map of the Pine Ridge Reservation with layers of the Badlands Bombing Range and Original Allotment maps go to http://lakotalands.net/PRLIS/

The South Unit of the Badlands has a long history riddled with controversy and violence and that’s no different today with the current conflicts regarding the Oglala Sioux Tribe’s proposed plan to create a 100,000 acre bison pasture in the South Unit. The so-called “Highway-to-Highway” plan was approved by the Oglala Sioux Tribe on June 11th, 2013 through OST Tribal Ordinance_13-21. The ordinance also called for the cancelling of leases for all ranchers in the proposed area by October 2015 and left many Tribal land owners and inhabitants to the area confused about their future – would people living in the proposed area be forced to move? Would tribal land owners be forced to sell their lands? What would happen to sacred sun-dance circles utilized on an annual basis by the families in that region? What about the livelihoods of the ranchers leasing land in this area and the lease income collected by the Tribal landowners?  This ordinance also exposed historical trauma deeply embedded in the people and the land when in 1942 the U.S. Government forcefully evicted the Lakota residents to make-way for a bombing range.  But it also served as another site of conflict for the ongoing struggle between the Oglala Lakota people (the Grassroots Oyate) and a Tribal government that many Lakota distrust – a government imposed upon them by the U.S. Government through the 1934 Indian Reorganization Act and one that many Lakota feel is illegitimate. The layers of this conflict run deep – so deep in-fact that it sometimes makes it hard to understand things from a rational perspective. Is expanding the buffalo pasture a good thing? If so, does that somehow outweigh the impacts it will have on residents and ranchers or the ongoing struggle between the Tribe and the Grassroots Oyate? That is not for Village Earth or any outside organization to decide. Rather, we believe this must be a debate that takes place among members of the Tribe. However, we do feel we can help facilitate this dialogue by providing objective information which I have attempted to do here.  We feel the best way to understand the current situation is to look back into the history of this contentious landscape. With this goal in mind, we have put together a chronology of the South Unit from 1890 to the present. I hope to update this as new information becomes available. Much of the information here is excerpted from a post written in 2010 by former Village Earth employee Jamie Way: The Fate of the Badlands South Unit and a Forgotten History

In 1890, after the Lakota along with their Cheyenne and Arapahoe allies, were massacred by the 7th Cavalry in the Wounded Knee massacre, the survivors fled to what is now the Southern Unit. They took shelter in the natural fortress formed by a butte surrounded by cliffs. The area served as a refuge for those who escaped the cavalry. For this reason, and because Lakota Ghost Dancers were buried in this location, the land came to be considered sacred.

On July 20, 1942 the War Department advised the Commissioner of Indian Affairs that they would be taking over an area of 40×15 miles across the northern portion of the reservation. While a small portion of this land lay within what was then Badlands National Monument (337 acres), the vast majority of the land was located within the boundaries of the Pine Ridge Reservation (nps.gov). The dispossession would impact some 125 Oglala families. And while the dispossessed families were to be supplied with some relocation compensation, assistance and supplies, actual accounts vary as to how much the families received if any at all.

Until 1958, the land was utilized for bombing and gunnery practice by what was then the Army Air Force. Even past this date, the South Dakota National Guard retained a small portion of the land for training purposes. When they left, the land’s future was far from resolved. Moreover, they left behind them dangerous ordnance and never fully lived up to their responsibility of cleaning the land. To this day, unexploded ordnance can be found on the site.

In 1968, Public Law 90-468 was finally passed, and lands declared excess by the Air Force were to be transferred to the Department of Interior. The law afforded those displaced (whether their land was held in trust or in fee) the possibility of repurchasing the land that had been taken from them if they filed an application with the Secretary of Interior to purchase the tract. This application needed to be filed within a one year window from the date a notice was published in the Federal Register that the tract had been transferred to the jurisdiction of the Secretary. Needless to say, the displaced were not properly notified of this option in many cases, in part due to their geographical dispersion. The law also stated that the original inhabitants that wished to repurchase their land were to pay the price the U.S. government had paid for the land, plus interest. Thus, those that decided to repurchase their land explained that they paid much higher prices for the land than they had originally been paid for it when the government confiscated it.

“By the end of the early 1960’s it was clear that Department of the Interior bureaucrats intended that the area should be taken over by a Department of the Interior Agency, and not returned to the Tribe.” The Park Service promised the tribe that by creating the park, they would invigorate the reservation economy through tourism, while the a Senate committee simultaneously strong-armed the tribe threatening to “dispose of the land in question under surplus property agreements if the Tribe refused to lease land,” (Igoe 2004 – Bridge_Report_Good_Land_Igoe).

In 1976, the Tribal Council under Chairman Dick Wilson, whose questionable leadership during the AIM struggle on Pine Ridge has solidified his legacy as a harsh and corrupt leader, signed a Memorandum of Agreement with the National Park Service. The Stronghold District of the Badlands National Park, which includes 133,300 acres of land, from this point on has been held by the National Park Service in conjunction with the Oglala Sioux Tribe.

In 2002, relations between the NPS and some tribal members degenerated to the point where a grassroots movement of Lakota defending the burial place of Ghost Dancers, called the Keepers of the Stronghold Dream, felt it necessary to physically occupy the land, guarding it from the invasion of hikers, park visitors and fossil poachers in an attempt to reclaim it (Igoe 2002). Unfortunately, this confrontation settled nothing and the issue remains unresolved to this day.

The NPS and the tribe both had complaints about how the area is being managed. The NPS complained that they had not been given proper access to manage the site as needed. The tribe felt as though the NPS had not lived up to its promises in the 1976 MOA including filling NPS jobs at the site with tribal members and reintroducing buffalo into the area. Moreover, they were concerned with fossil poaching and environmental destruction of the region by outsiders.

In 2006, after the park failed to resolve this matter through negotiations, the NPS decided to initiate a separate management planning process for the South Unit which did not begin until 2008.

By 2010, the NPS had developed seven management options available for comment by the public. While none of the NPS options include returning land to those that were displaced prior to WWII nor giving the land back to the tribe with no obligations, the options did include giving the tribe more control over this portion of their land. Option 2, considered the “preferred option” by the NPS, would have the NPS and the tribe create a “National Tribal Park.”

June 2, 2011 – OST President John Yellowbird Steele signs record of decision (ROD) with the NPS affirming the Tribe’s acceptance of proposed Option 2 which recommended the creation of a Tribal National Park.

April 26, 2012 – NPS releases its final management plan which recommended the creation of the first Ever Tribal National Park.

May 2012, Oglala Sioux Parks and Recreation Authority (OSRPA) with support from the World Wildlife Fund (WWF) solicited consultants to assist with the development of a feasibility study for expansion of the tribe’s bison herd. Ranch Advisory Partners based in Bozeman, MT was awarded the contract fall of 2012. 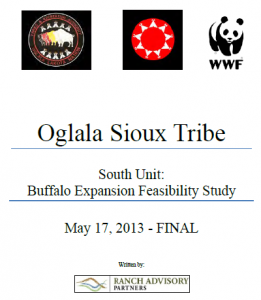 On May 17th, 2013 Ranch Advisory Partners finalized the South Unit Bison Feasibility Study which provided various recommendations for the expansion of the Tribe’s bison herd as part of the broader development of a Tribal National Park. The preferred option, referred to as the the “Stronghold – Highway to Highway” option, would establish a bison pasture encompassing 100,000 acres approximately between State HWY 40 to the west and BIA 33 to the east and include range units 501, 503, 504, 505, 506, 507, 508, 510, 515, 518, 536 (the area highlighted in yellow in the map above)

June 11th, 2013  Ordinance_13-21 “Approving and Adopting Alternative A – The Stronghold Unit – Highway to Highway as recommended per the South Unit: Buffalo Expansion Feasibility Study was passed by the Oglala Sioux Tribal Council 6-11-13 special minutes. The ordinance directed the BIA to notify all permittees and landowners, as well as prioritize all land sales and exchanges within the proposed area.

November 12th, 2013 – Members of the Red Shirt Community (which is at the western edge of the proposed pasture) learn about Ordinance 13-21 and call a public meeting inviting members of the Tribal Council.

November 26th, 2013 – Another meeting is held in Red Shirt where community members voice their concern about their lands located in the proposed bison pasture and the impact it will have on ceremonial sites including several sun dance circles in the area.

December 10th, 2013 – Despite the public outcry, the  Oglala Sioux Tribal Council voted to postpone a motion advanced by Tribal Council member James Cross  from Pass Creek District to rescind Ordinance 13-21 until after the Tribe could facilitate presentations on the Tribal National Park in each district of the Reservation. Note: this chronology originally included information from a December 13th Rapid City Journal article which stated that the motion to rescind Ordinance 13-21 had passed. I have since received information that it was postponed and corrected the article. However, I do not have a copy of the meeting minutes to verify this. 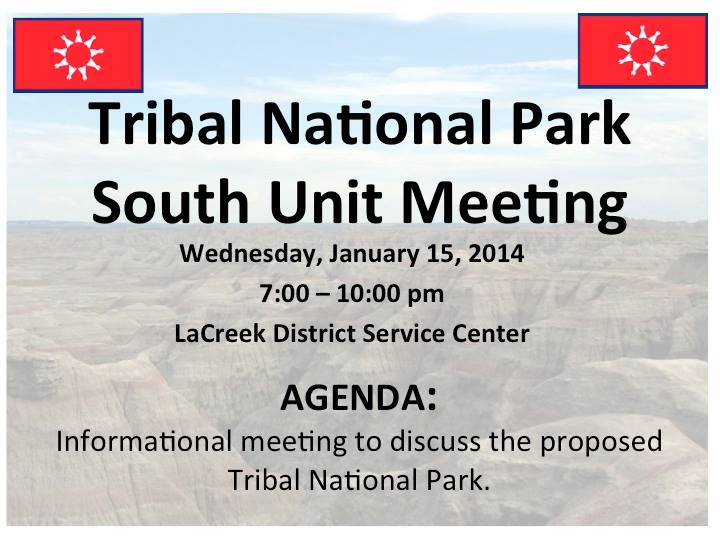 January 13th – 17th – OST President Bryan Brewer along with the “core team” working on the Tribal National Park including Ruth Brown, Trudy Ecoffey, Barry Bettyloun, Anita Ecoffey, Birgil Kills Straight, Shawn Swallow, Chuck Jacobs, Michael Catches the Enemy and Angie Sam will host a series of informational meetings in each District. Also attending will be a representative from the OST Land Office and Eric Brunneman from the National Park Service. According to the press release dated January 15th, “[t]he sole purpose of these meetings is to bring correct information to the oyate regarding the issue of the proposed Tribal National Park in the South Unit.” According to Susan Shockey Two Bulls, one of the leading opponents of Ordinance 13-21, ” these presentations should have been done months ago.”

We encourage community members to provide any corrections to this chronology and provide us with new information as it happens.