This report covers October 2013  through December 2013.  Mila Yatan Pika Pte Oyate Okolakiciye (Knife Chief Buffalo Nation Organization) continues to provide a pasture/home for members of the Pte Oyate (Buffalo Nation) and the community continues to reap the benefits in terms of spiritual and physical nourishment from them.  Below is a summary of our activities for this period. 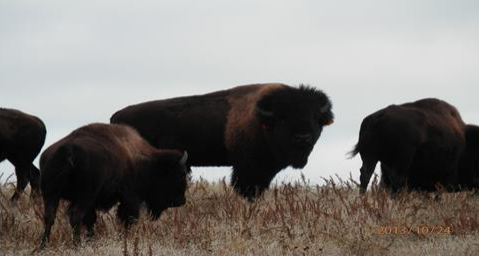 October 2013 –  In observance of the spiritual calendar, spiritual offerings were made and taken to the Purification Lodge on October 15 for the sacred site of Pte Ta Tiopa (Doorway of the Buffalo) near Buffalo Gap, SD in the sacred Black Hills. This is the time when the buffalo return to the sacred Black Hills and when we (humans) know to make spiritual offerings.  The spiritual calendar was taught to us (Lakota people) by the Pte Oyate (buffalo nation) and to whom we continue to honor and care for. We sponsored a benefit conference for the pte oyate (buffalo nation) on October 11 & 12 in Rapid City, SD.  Twenty-five (25) participants attended the conference on “Historical Trauma:  Impact and Healing.”  This two day workshop addressed how historical trauma has impacted Lakota and indigenous peoples and how we can integrate healing from historical trauma into our families, schools, programs and communities.  Presenters were Richard Two Dogs, Richard Moves Camp, Maria Yellow Horse Brave Heart and Josie Chase. We were honored to have three well-respected Wakan Iyeska in the group for both days.  A basic explanation of the term “Wakan Iyeska” is that these persons are interpreters between the physical and the spirit world.  Their roles and responsibilities are based on their individual dreams.  The three men are Ohitiya Mani (Roy Dennis Stone), Hmuya Mani (Richard Two Dogs) and Wicahpi Koyag Mani (Richard Moves Camp). 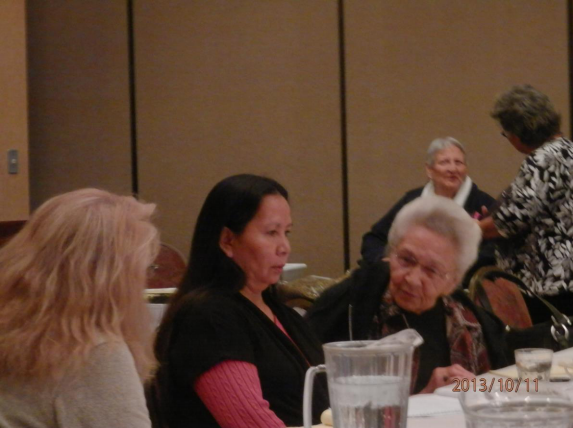 Conference participants visiting during a break 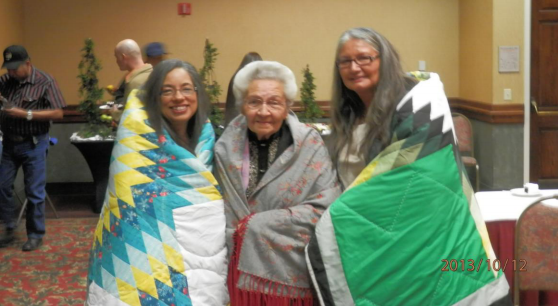 November 2013  –  On November 01 we received a loan of $18,275.00 from the First National Bank of Gordon, Nebraska to pay for two annual pasture leases, home to the pte oyate (buffalo nation).  Payment was made to the Bureau of Indian Affairs.   We began our sixth year of this relationship with the First National Bank of Gordon. We assisted with a Koskalaka Wicayuwita Pi (Young Men’s Gathering) camp on November 01 – 03 in which eighteen (18) boys and young men, ages 9 –17.  Lakota Oyate Wakanyeja Okiciyapi (Lakota People Caring for Children), the Pine Ridge Reservation’s tribal welfare agency, were given the opportunity to send young men who were currently in the foster care system. The agency sent nine (9) young men and one parent brought his son from a neighboring reservation in South Dakota, the remaining participants were residents of the Pine Ridge Reservation. The group came together to learn Lakota traditional teachings about becoming or being a man from their older male relatives and mentors, blessing the food, raising the tipi; bow making, singing and drum, preparing a spiritual kit, and Horse Nation teachings.  Other activities and teachings included honoring relationships, purification lodge preparation, spiritual cleansing, greeting the Morning Star and sun prayer and song, and gun safety and hunting, Lakota traditional healing. Twelve (12) participants received a Lakota spirit name at a ceremony. The volunteer mentors included seven (7) men and a Wakan Iyeska (interpreter of the sacred) or “medicine man” as he is sometimes referred to. The participants and mentors slept in five tipis which were raised by the young men as part of the teachings. Three mentors guided the participants in an early morning hunt and two deer were taken.  Talking Circles were held on the first and final day. 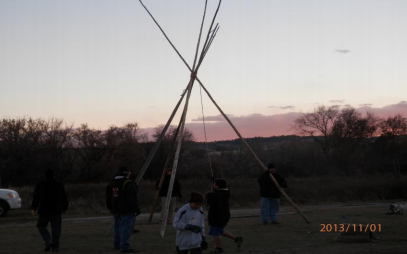 Raising the tipi: home for 2 nights and 3 days 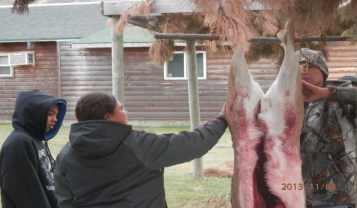 Learning to skin a deer after the early morning hunt 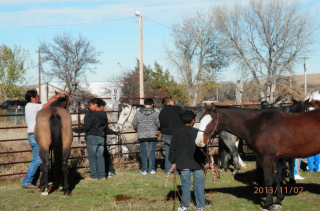 Developing a relationship with our relatives, the horse nation 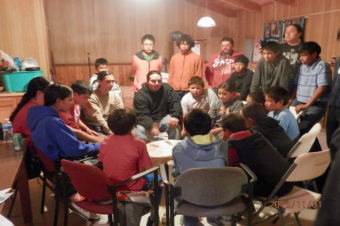 Receiving teachings about the drum and songs 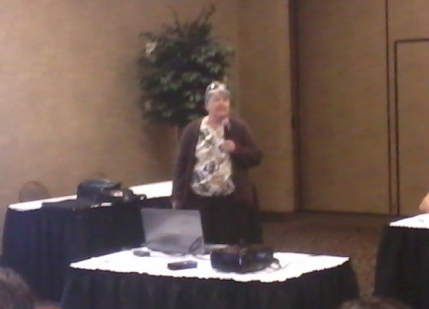 Presenter Barbara Vancil sharing information about trauma in the womb 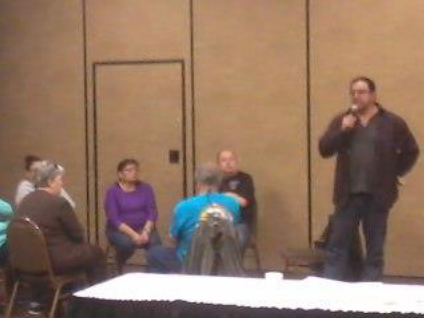 In observance of the spiritual calendar, spiritual offerings were taken to the Purification Lodge (Inipi) on December 21, the Winter Solstice. Donations – We collaborated with Ken Lundsford, Barbara Keel and Rick Hagens of Fairburn, AL and with Terri Yellow Hammer, Minneapolis, MN on a winter gear drive for children (infants to 10 years).  Other items received  included  toys, blankets, shoes and coats for adults.  Due to the frigid weather and the lack of heat and the lack of water in the building we planned  to use, distribution  has been  set for the week of January 20.  We greatly appreciate the organizing efforts of Ken, Barbara, Rick, Terri and her husband, and we are  also very thankful to the donors. Future Events and Plans

Fencing Project – Our fencing project will continue as the weather permits.   One pasture of 1200 acres is fenced.  We plan to complete the fencing of 1500 acres which is approximately seven (7) miles.  One mile of steel posts are set up now and  holes are dug for wood posts to be put in the ground.  We are working to purchase 400 steel posts and will continue fencing when weather permits.  We are working on a plan to establish work camps in May 2014 for native and non-native youth and adults to assist with the fencing project. 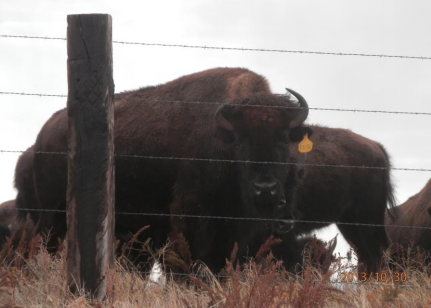 Our relatives, the Pte Oyate (Buffalo Nation) within the fenced pasture

Conclusion Again, we extend a heartfelt appreciation to the people who support our efforts whether it be financially, physically or spiritually.  Your support is truly appreciated and we especially appreciate the Tunkasila (spiritual entities) for their continued support and guidance.  We also acknowledge the Pte Oyate (Buffalo Nation) for what they inspire in us and for their teachings, i.e., protection of the young, conservation of the land and the strength and fortitude to endure whatever comes  Lila wopila tanka! (We thank you all very much). CONTACT INFORMATION For more information, contact us at: Email:  [email protected] Telephone:  605-407-0091 Website:  www.knifechiefbuffalonation.org or www.villageearth.org look for Knife Chief Buffalo Nation Organization under Global Affiliates