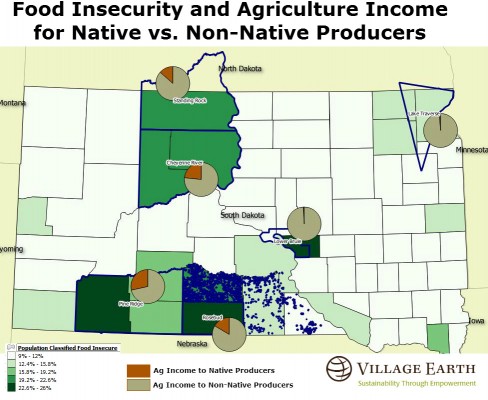 The USDA recently released the results for their 2012 Census of Agriculture for Native American Reservations and as most Residents of South Dakota Reservations already know, non-native farmers and ranchers dominate. According to the USDA data, a whopping 84.5% of all agriculture income on South Dakota Reservations is collected by non-native producers. In terms of land control, non-native producers control nearly 60% of all agriculture land and 65% of all the active farms and ranches on Native American Reservations. Data for Individual South Dakota Reservations is below. [table id=32 /] Despite the Federal Government’s “highest and best use” policy for Native American Lands, the USDA Agriculture Census data demonstrates that non-natives are the primary beneficiaries of the Resources from American Indian Reservations, not just in South Dakota but throughout the Untied States. The disparity that exists on Reservations today is the outcome of over a century of racist and exclusionary policies that functioned to alienate Tribal members from their lands to make their agricultural and mineral resources available to non-tribal members for lease below market rates. Many Tribal members weren’t even paid some or all of the lease income owed to them by the Federal Government. Even today, virtually all of the lease income collected on some South Dakota Reservations goes directly the USDA to pay down loans created in the 1970s and 1980s for tribes to consolidate highly fractionated lands (a problem created in the first place by the Federal government’s failure to properly manage the conveyance of allotted trust lands from one generation to the next).