Support this project at www.globalgiving.org

This Baseline Survey was part of a research methodology designed to help develop an effective strategy for the contextual problems that smallholder farmers have faced with farming for over the past 5 decades in the Gbeah’s Town, Gbor Clan, District 2B. The strategy will be used in the implementation of a project entitled: “Help Farmers Fight Hunger and Child Abuse.” The survey successfully Identified 15 smallholder farmers, which are currently participating in our Help Farmers Fight Hunger and Child Abuse program.1 The Help Farmers Fight Hunger and Child Abuse project is the first Pilot project of Growing Liberia Democracy (GOLD), which focuses on promoting a sustainable community and quality governance in rural Grand Bassa County. The project is raising its pilot funding on the Global Giving platform, through an affiliation with Village Earth, of Bolder Colorado. However due to limited funding, the strategy initially focused only on building a sustainable community by organizing and developing a group of 15 smallholder farmers and creating a management team to establish the Rural Early Learning Program (RELEP) for inhabitants in Gbeah’s Town and it surrounding villages; the community is located in the Gbor clan, District 2B, Grand Bassa County.

The purpose of the survey was to identify basic challenges and recommended solutions to those challenges, as a measure the next generation of the Gbor Clan age smallholder farmers can use as tools to improve the farming environment for smallholder farmers in the Gbor Clan. The strategy we used in administering the survey is based on the traditional Gbor clan values and leadership principle and for group facilitation, advocacy, organizational leadership, and community mobilization. In accordance with these values, the survey process began on March 28, 2017 by training two local volunteers with the skills needed to conduct the survey. After the survey administrative training, the two local volunteers worked alongside GOLD staff to administer the survey; a process which took place from March to April 2017. The survey covered five villages including Gbeah’s Town, Jurkpan’s Town, Toga’s Town, John’s Town and, Darkinnah’s Town, soliciting the views of respondents in the community.

1.2 Purpose of the Baseline Survey

The Baseline Survey for the Help Farmers Fight Hunger and Child Abuse Project was conducted to establish and better understand the contextual problems/challenges facing the next generation of smallholder farmers in Gbeah’s Town and its surrounding villages.

The survey was conducted to identify targeted smallholders farmers that are participating in Help Farmers Fight Hunger and Child Abuse project.

The objective of the Baseline Survey is to establish an effective framework for the implementation of our Help Farmers Fight Hunger and Child Abuse project.

This Baseline Survey set out with the following specific objectives:

1.5 Expected Outcome of the Baseline Survey

An established qualitative and quantitative gap analysis of farming in the Gbor Clan, District 2 and District 2B, Grand Bassa County.

The methodology involve in the baseline survey included the following:

This research design used the Descriptive (survey) research method to collect its data. The process of administering the survey proceeded in three steps. The first step was to identify the 15 farmers who would participate in the survey. To this end, GOLD gave community leaders the responsibility to identify list of 15 satisfied smallholder farmers during the first awareness meeting. The leadership selected five successful smallholder farmers from Gbeah’’s Town and 10 smallholder farmers from four villages surrounding Gbeah’s Town. The farmers identified by the communities by the community leaders were then convened in Gbeah’s Town where the survey was administered with help from the Crunch Back Consulting Firm2. The researchers used answers from respondents, to describe a set of observations from data collected. These data, and the conclusions which follow from them, are the subject of this report.

The administrative team for this project consisted of 4 members: two local volunteers from Gbeah’Town, a senior staff member from GOLD, and a supervisor from the Crunch Back Consulting firm. (Prior to the project, GOLD underwent specialized training by a researcher from Pittsburg University in the United States. Thereafter, GOLD proceeded to train the two local volunteers in various aspects of survey administration, in which the volunteers learned confidentiality, presentation, body communication and flexibility.

The baseline survey activities started April 26 and ended May 4, 2017.

The Budget of this survey is two hundred United State Dollars ($200.00 USD), please find attached the budget in details for the baseline survey.

2.4 Findings of the Baseline Survey

T he survey result indicated that most of the potential smallholder farmers were working-age youth, with over 15 years of farming experience, but largely without any former agriculture training. This means that based on their long time experience in farming and age group, it is easy to improve smallholder farmers products; these smallholders farmers are young with much energy, and if supported with tools, training and good policy, can be a key point for inclusive growth and a sure way to lower inequality, increase their income and reduce poverty in the region. 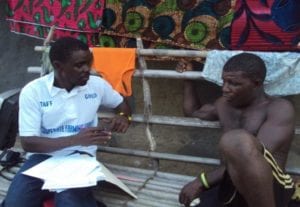 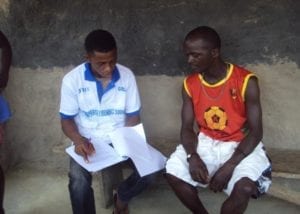 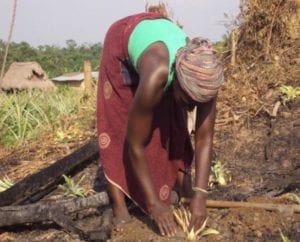 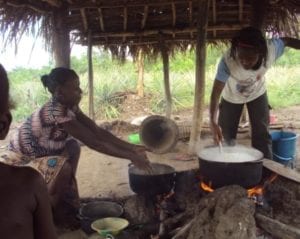 The survey furthered indicated that majority of those families of farmers represented in this survey have no less than 5 children between the ages 4-15 years that are not in school. This means that, if the issue of early learning is not addressed, the children might end up being like many of the parent who are very poor and illiterate. Accordingly, the results of our survey suggest a significant likelihood that majority of the smallholder farmers in the region share similar challenges in the farming surroundings of the Gbor Clan.

According to the survey outcome, farmers in the region mainly farm pineapple and ginger, which means that we would need to find an expert agriculturist who will be able to train those smallholder farmers in modern methods for high yield and quality products to meet international standards for local and global market. 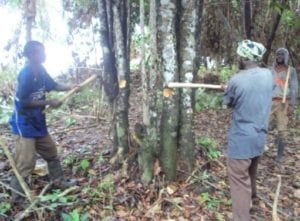 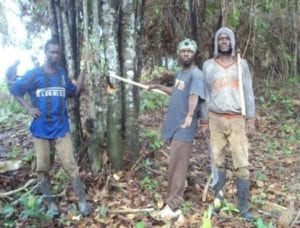 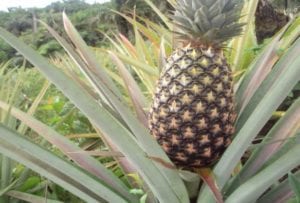 Based on this survey we can conclude that fa   rmers in the community have not received farming subsidies of any kind from the government since 1939, this means that farmers in the region will continue to use more effort with little yield if there is no policy to improve the lives of small holder farmers in the Gbor Clan. Without these necessary improvements, farmers will continue to practice the bush rotation system of shifting cultivation with manual hand labor, using ordinary agricultural tools such as cutlass, axe and hoe for very little yield.

The result further indicates that, the lack of effective leadership is one of the basic causal factors driving the current inadequacy of the community’s farming methods. This means that 1)smallholder farmers are not organized together under one umbrella, and 2) they have neither a leadership structure or the support of policy that will seek the need of farmers in the region. If they were organized, they would be able to share ideas, work with stake holders in addressing some of the challenges they faced with farming. (This includes items like farm to market road, agriculture training, fertilizers, pesticides, seeds, farming materials, tools, marketing of farmers’ products etc, can be to their disposal.)

According to the survey funding, smallholder farmers in the region can’t afford to have an account of extra saving in the bank after selling their products. This means that smallholder farmers used very high labour and low yield to generate the income needed to take care of their family and save some money for the future. They only farm to sustain their household due to inadequate support and sticking to the traditional method of farming.

The findings also indicated that smallholder farmers see the high cost of transportation as an impediment that continues to devalue the price of their products. As long as the farm road to market is inaccessible, the cost of farmers’ agriculture products will be prohibitive to the farmers to the point that profit becomes increasingly difficult. Businessmen and women pay high sums to truck drivers to deliver their goods to market at low prices, allowing farmers to exercise some control over prices. However for the farmers in these communities, those costs are extremely prohibitive.Consequently, there is no practice of price control across Liberia’s agricultural economy.

On top of these concerns, our research also revealed a number of implications for health of the surveyed communities. First among them is the fact that farmers in the communities do not practice birth control. The fact that women don’t exercise their reproductive rights promises to increase poverty among the farming communities because their aggregate income is increasingly insufficient to maintain their rapid increase in family size. Left unmitigated, this means that increased population growth will create poverty among future generations. Additionally, the research indicates that most of the smallholder farmer surfer severe body and back pain, no health facility and save drinking water for women and children. This mean that the health safety of the entire community is at risk. Accordingly if the aforementioned health concerns are not addressed with close attention, citizens may become increasingly vulnerable to lose their lives from ordinary diseases or during emergency cases-or farmers may not get the energy or health support they need for healthy farming in the future. 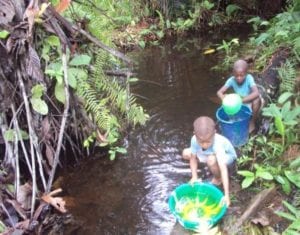 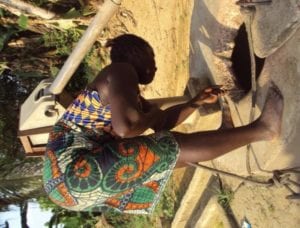 The recommendations from this survey didn’t just result from an oversight or a summary of an open observation, but were established based on one on one survey with 36 painstakingly chosen questions with emphasis placed on realistic response from the interviewees. Moreover the survey used a confidential approach that allowed the interviewees to remain comfortable and give truthful answer to the interviewers for a highly effective recommendations. These measures were crucial in facilitating detailed and veracious responses to our questions. Accordingly, the information collected from these detailed conversations put GOLD in an authoritative position to offer the following recommendations:

The Baseline Survey exercise was an intervention that was financed by the Global Giving fundraising platform. The overarching reason for the necessity of this exercise was for GOLD to develop an effective strategy to implement the Help Farmers Fight Hunger and Child Abuse Project.

After going through a critical research analysis of 1)challenges smallholder farmers faced and 2) what they need to overcome those challenges in Gbeah’s town and its surrounding villages, GOLD is in an authoritative position to develop and implement programming in support of the next generation of smallholder farmers in the entire District 2B.

The research outcome can also be used for future references to researchers, government agencies, and other NGOs who have the passion to improve the lives of smallholder farmers in Liberia. Ultimately, our hope is that this baseline survey will serve as an early catalyst for meaningful and sustainable change for the livelihoods of Liberia’s smallholder farmers.