Village Earth’s Lakota Lands Recovery Project is excited to announce the release of our latest mapping project, the merging of the original allotment maps with the contemporary parcel map for the entire Pine Ridge Reservation in South Dakota and was realized with support from the Indian Land Tenure Foundation. This updates the current parcel map on the Pine Ridge Land Information System (PRLIS) accessible at http://lakotalands.net/ and makes it possible to locate the original allotments by entering a surname into the search form. Alternatively, one can identify the original allottee of any parcel by hovering over it with their mouse and clicking on it which opens a pop-up information window (see image below). This project entailed the manual entry of data for 20,584 separate parcels.

Summary of the Data 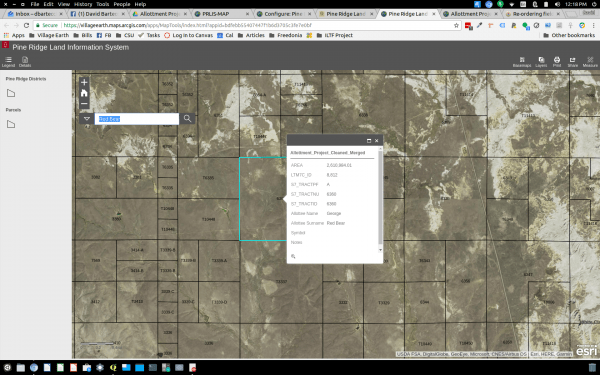 The creation of allotments was part of the General Allotment Act, also known as the Dawes Severalty Act of 1887. The creation and issuing of allotments began on the Pine Ridge Reservation in 1904, under Executive Order of July 29, 1904 and continued until 1923. During this period, government officials carved up the Reservation into parcels and issued them to Lakota families. United States policy towards Native Americans during the first part of the century was focused on the cultural and economic assimilation of Native Americans into the majority culture. Furthermore there was a great deal of pressure to open up Indian lands to white settlers. “By the 1880’s settlers had filed upon most of the arable land in the West under the Homestead Act and other federal statutes. Indian reservation land then, in a sense, comprised the agrarians’ last frontier” (Gibson, 1988: p 227). Furthermore, the practice of communally managed lands by tribes was viewed as a non-productive and irrational use of resources. To address these interests, in 1887 the U.S. congress passed General Allotment Act (GAA) also known as the Dawes Severalty Act. The purpose of the act was to liquidate Indian land holdings by dividing the land up into 160-acre allotments to heads of households. After all the allotments were issued remaining lands in the West, which totaled over 60,000,000 acres, was opened up to homesteaders (Gibson, 1988).

Special thanks goes out to Subashini Subbaiah, Emma Giles, Bryanna Gilbert, Alex Dierker, Steven Spence, Rachel Stevenson for their help on this project.