Village Earth has launched the latest version of its web-based mapping system for members of the Oglala Sioux Tribe. The original Pine Ridge Land Information System (PRLIS) was  originally launched back in 2012 in partnership with the Oglala Sioux Tribe Land Office and with support from the Indian Land Tenure Foundation. Preceding the PRLIS was the Pine Ridge Allottee Land Planning Map Book. The impetus for all these projects was the desire of Lakota landowners to gain more information about their land resources, in particular, to be able to identify parcels where they own an interest.

Today, of the remaining 1,773,716 acres of land on Pine Ridge, nearly 1,067,877 acres (60%) is allotted to individuals. Over a century of unplanned inheritance has created a situation where lands have become severely fractioned. This created a management nightmare where, in order for a land owner to utilize their lands, they may have to get the signed approval of dozens, hundreds or even thousands of separate land owners. As a result of this complexity, most land owners on Pine Ridge have few choices be-sides leasing their lands out as part of the Tribal/BIA Range Unit leasing system. Nearly 65% of all lands on Pine Ridge are included in these Range units.

Naturally, this situation has had a dramatic impact on the overall economy on Pine Ridge. Like other Reservations across the United States, fractionation is a major obstacle to housing and business development but also native owned farms and ranches. According to the USDA 2012 Census of Agriculture for American Indian Reservations, the market value of agriculture commodities produced on the Pine Ridge Reservation in 2012 totaled $87 million. Yet, less than 1/3 ($24 million) of that income went to Native American producers. 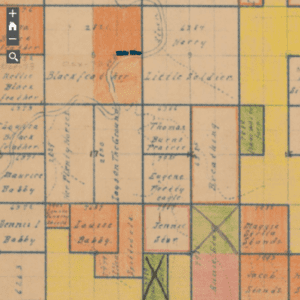 In addition to parcel information, Village Earth and the OST Land Office has made available the original allotment map for Pine Ridge. Until now, this information was not available to members of the tribe and over the years, many people have asked us to try get this information for them so they can can begin to reconstruct the history of their lands, especially lands liquidated by the Federal Government through a process known as forced fee patenting. The creation and issuing of allotments began on the Pine Ridge Reservation in 1904, under Executive Order of July 29, 1904 and continued until 1923. During this period, government officials carved up the Reservation into parcels and issued them to Lakota families.

We plan to continue to add new layers and information the PRLIS as they become available. We also invite suggestions by commenting below or contacting [email protected]