Village Earth helps reconnect communities to the resources that promote human well-being by enhancing social and political empowerment, community self-reliance and self-determination. We do this by strengthening intermediate and grassroots organizations through fiscal sponsorship, networking, training, research and advocacy. Since our founding in 1993 a central pillar of our research and advocacy mission has been the promotion of appropriate technologies. We would like to thank Angela Varnum for contributing the following post that recognizes the large and important role that working equids (donkeys, mules and horses) play in the livelihoods of people around the globe as a form of “appropriate technology” that contributes to a more sustainable agroecological system. Donkey awaiting the next chore in Mexico – Photo: Angela Varnum

A secret to development may be hiding behind a set of ears.

And a big set of ears, at that. The donkey, mule, and their traditional counterpart of course, the horse, play an integral role in sustaining global human livelihoods. Contrary to the horse’s primary role as a recreational vehicle in the U.S., the trifecta species (horses, donkeys, and mules) which make up working equids are, quite literally, the world’s tractors, pickup trucks, and all-terrain vehicles. Though working equids fuel much of the world, you may not have heard of them before. It’s not because they’re not present – globally, there are approximately 112 million working equids1. That means 95% of the world’s donkeys and 60% of the world’s horses are used for work2,3. Though ubiquitous, working equids endure a sort of personality crisis. Neither traditional livestock used for meat and fiber, such as cattle and sheep, nor pets classified as companion animals, donkeys, mules, and horses have historically just not “fit.” Working equids have just recently begun to receive global attention and policy considerations4. 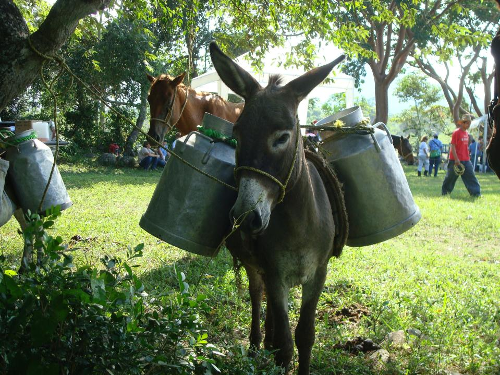 It would be easy to dismiss their pitied pack animal role as quietly fading in light of global modernization. After all, doesn’t the lowly donkey represent under-development? Not at all. The population of working equids is stable – and in some areas growing. World donkey and mule populations are steadily climbing, particularly in sub-Saharan Africa, Latin America, and the Indian sub-continent5. In the field of sustainable development, where renewable resources and climate-smart technologies are buzzing, it may be worth turning an ear toward working equids. These herbivorous livestock generate natural fertilizer, are a source of renewable energy, and can work in conditions which may not be accessible to motorized vehicles, such as steep terrain 6. All this in addition to their relative affordability (in most areas) as compared to motorized vehicles. It has been estimated that 400 million draught (working) animals may save as many as 20 million tons of petroleum per year through their contributions to agricultural production7. As 85% of farmers in developing countries work on less than two hectares of land8, it is fortunate that working equids can graze marginally-productive agricultural land and be simultaneously used for hauling tourists or rented out to other families9,10. “Equids are more and more playing an increasing role in the new context of sustainable development.”11

A recent study found that working equids remain useful in an Andean region of Peru because they diversify income. One’s mules, perhaps traditionally used to carry harvests of potatoes and corn from the fields to the home, can be used in other ways. Even as extremely low rainfall threatens the agricultural harvest, these same mules are harnessed – literally – to carry tourists up and down the scenic mountains, earning a more predictable income for its family. As one owner shared, “Not even a kilo, I didn’t harvest anything… and that’s why we have a big help which are these mules…”10. The situation in Peru echoes that in arid regions in African countries, where donkeys can lessen the effects of decreased agricultural productivity5.

The kicker? The maintenance of working equids can be just as important, and intensive, as that of a car, truck, or tractor. Extending the useful lifetime of an equid by keeping it healthy can mean greater financial efficiency. As new uses of working equines beget new management systems, traditional knowledge that has guided animal husbandry for millennia can be supplemented with new research.

As part of an organization called the Equitarian Initiative, veterinarians, equine scientists, nutritionists, farriers, behaviorists, and other volunteers offer services to support the working equids of the world. Their expertise bridges aspects such as equine surgery, internal medicine, dentistry, lameness, preventive medicine, farrier care, public health, and education. The Equitarian Initiative works to engage with communities by hiring local community members, conducting in-country educational programs, and partnering with local veterinarians and veterinary schools. More information about this organization can be found at www.equitarianinitiative.org.