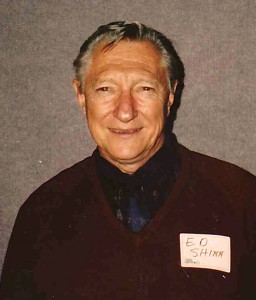 The entire Village Earth family is deeply saddened by the loss of one of our founders, Dr. Edwin F. Shinn who passed away on Friday, November 28th, 2014 at the age of 80. Ed was an extremely kind and humble human being with a spark in his eye that inspired everyone he touched. Serving as Executive Director of Village Earth from 1993 to 2008, Ed was known by staff and volunteers for his unwavering optimism and ability to not only see the “gift” in everyone he encountered but to help them see it as well. As a leader, he was adamant about inclusiveness and participation by everyone, always insisting that both staff and volunteers participate in shaping what Village Earth would become. He was an inspirational, even ecstatic leader and trainer, who had the remarkable ability to lead a group of seemingly unrelated people on a journey beyond the surface-level and into a realm of “deep connectedness”. More than anyone, it was Ed who infused Village Earth with its spirit and culture of participation.

Ed would usually begin a training or workshop with the story of his “awakening” – when, in 1965 he was living with is wife and young children as a new Presbyterian minister in Los Angeles and was driving away on vacation when, in his rear view mirror, he could see the Watts Neighborhood burning from riots incited by a violent encounter between police and a 21 year-old African American man. That experience deeply affected him and initiated a search for meaning, which led Ed and his wife Miriam “Mimi” a year later to the Ecumenical Institute (EI) based on the west side of Chicago. EI would later become the Institute for Cultural Affairs (ICA). While in Chicago, they worked on EI’s “Fifth City Project” in Chicago’s East Garfield Park Community.

Above is a video created by the ICA to commemorate the 50th anniversary of the Fifth City project.

In 1973, Ed and Mimi were called to Oombulgurri, Western Australia to support an Aboriginal elder help his people escape the degrading conditions in Wyndham to form a community on their ancestral lands in a remote part of the Australian outback. The story of the ups and downs of this awe-inspiring community effort were captured in the book “Outback Odyssey” written by Ed’s wife. In the late 1970s, Ed and Mimi would move to Maliwada, India to work on an ICA Human Development Project and later were part of a Human Development Training School. According to Vinod Parekh, one of Ed’s colleagues at the school, “Ed inspired hundreds of youth with his unending vitality and zest for life.” He continued to work for ICA as an organizer and trainer, venturing to Kenya, Peru, Guatemala, rural California, Indonesia, and Egypt. While being a gifted facilitator who loved working with people, Ed was always concerned with the big picture – with models and processes and was constantly seeking input and revising his models about how to “transform vast regions across the globe.”  In the 1980s, while in his 50s, he decided to return to school to try to answer some of the particularly challenging questions that were nagging him during all his experiences in rural development. In particular, he was concerned with the problem of scale namely, “what size of population was most effective for the mobilization of resources?” As he would say, “too small and  you’re always dependent on the outside, too large and things become top-down.” He was directed to Colorado State University where at the time, there was a lot of engagement in international development assistance. He was accepted into the Ph.D. program in Sociology and carried-out field research working to form Water User’s Associations on a large-scale irrigation project in Pakistan. His dissertation titled The social organization of irrigation in the Niazbeg command area: the Punjab, Pakistan was accepted in 1987 and consisted of two volumes with over 630 pages. Soon after completing his Ph.D., Ed and Mimi left for Egypt where he helped to develop an Irrigation Advisory Service and trained its personnel to work with farmers in setting up water user organizations to improve irrigated agriculture. Afterward, they moved back to Fort Collins and guided a cooperative development exchange relationship between Mexican and US communities known as Partner Communities. They also helped Dr. Maurice Albertson organize an international conference on sustainable village-based development which was held September 28 – October 2 , 1993 at Colorado State University. It was attended by approximately 250 delegates from 40 different countries. The majority of those in attendance were from developing nations and represented local non-governmental organizations working in very grassroots and participatory projects around the world. More than 200 papers were submitted and formed five volumes of Proceedings. By the end of the conference it was agreed that the hosts should form a consortium made up of the participants. The purpose of the organization, originally called the Consortium for Sustainable Village-Based Development (CSVBD), would be to launch several pilot projects, provide training in the methods discussed at the conference, and provide monitoring and evaluation services and coordinate demonstration projects on the ground. According to Ed, “Perhaps one of the most important functions of CSVBD is to insure that the local NGOs build teams with expertise in key development sectors that can interact with both the public and private sectors to secure needed resources.” CSVBD officially changed its name to Village Earth in 2000.

Below is one of the last videos of Ed, talking about his history working in community development and general philosophies of life.

http://vimeo.com/32915389 Ed served as Executive Director for Village Earth from its inception in 1993 to 2008 and oversaw the realization and growth of the organization including developing and delivering numerous sessions of Village Earth’s flagship training “Participatory Practices for Sustainable Development”, assisting with the growth of the Nigeria’s Youth Service Corps, helping to develop micro-finance projects in Pune and Nasik India, assisting with the development of two large cluster development programs in Nepal, consulting on projects with Mercy Corps International, International Rescue Committee, CHF and CARE, helping to create a Ph.D. program in Sustainable Development Management at Trisakti University in Jakarta Indonesia and overseeing the creation of Village Earth’s Online Certificate Program in Sustainable Community Development at Colorado State University. He remained a part of Village Earth’s Board of Directors until his passing 2014. We are certain Ed has found a comfortable place among the cosmos.